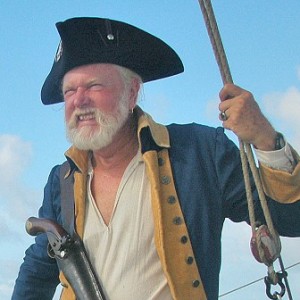 Please enjoy this here vocabulary in which ye’ll find words submitted by many pirates o’er the years, an’ which comprise a loose piratical dictionary.

Arrrr/Argh! – A phrase EVERY pirate says, usually to express displeasure, but often just out of habit and for no reason at all.

Black spot – To be ‘placin’ the black spot’ be markin’ someone for death. It was usually a black dot on a piece of paper. It generally told you how long you had to live and was usually given to those who had gone against the code.

Blow the man down! – Shoot him.

Bounty – Reward or payment given in return for something.

Buccanneer – A pirate who be answerin’ to no man or blasted government.

By the Powers! – An exclamation, uttered by Long John Silver in Treasure Island!

Corsair – A pirate who be makin’ his berth in the Med (That sea ‘tween Spain and Africa, aye!)

Davy Jones’ Locker – The bottom o’ the sea, where the souls of dead men lie

Fiddlers Green – The private heaven where pirates be goin’ when they die.

First Mate – The captain’s right hand man; he is the second highest officer on the ship

Flog – To, in front of a pack of his crewmates, beat a barechested member of crew in the back with a rod or whip as form of punishment.

Furner – A ship which be yer own, not one ye steal an’ plunder.

Go on the account – To embark on a piratical cruise

Jack – A flag or a sailor

Jolly Roger – The skull and crossbones, the pirate flag!

Keelhaul – A truly vicious punishment where a scurvy dog be tied to a rope and dragged along the barnacle-encrusted bottom of a ship. They not be survivin’ this.

Landlubber – “Land-lover,” someone not used to life onboard a ship.

Matey – A shipmate or a friend.

Me hearty – A friend or shipmate.

Mutiny – To rise against authority, particularly a naval or military power.

Pieces o’ eight – Pieces o’ silver which can be cut into eights to be givin’ small change.

Plunder – The act of raiding or robbery.

Poop Deck – The deck the furthest back on a ship; usually above the captain’s quarters; not meant as the “bathroom deck”.

Privateer – A pirate officially sanctioned by a national power

Quarter – The phrase quarter came from the idea of shelter; when quarter was given, it meant that mercy would be shown by the pirates. No quarter meant that no one would be spared. Quarter was usually given to someone who surrendered quickly or to a formidable foe.

Scallywag – A bad person. A scoundrel.

Seaworthy – Title given to a man or a ship, indicating the subject is capable of handling the sea.

Shiver me timbers! – An exclamation of surprise, to be shouted most loud.

Spanish Main – In the 17th century, the Caribbean was called this. It is the mainland of Spanish America along the coast of South America. The Caribbean sea and adjacent waters especially at the time when the region was infested with pirates.

Squadron – A group of ten or less warships

Swaggy – A scurvy cur’s ship what ye be intendin’ to loot!

Swashbucklin’ – Fightin’ and carousin’ on the high seas!

Sweet trade – The career of piracy

Thar – The opposite of “here.”

Walk the plank – This one be bloody obvious.

Wench – A lady, although ye gents not be wantin’ to use this around a lady who be stronger than ye.

Walk the Plank – To walk the plank was when a prisoner was forced to walk off a piece of wood protruding out of the side of the ship into the water.